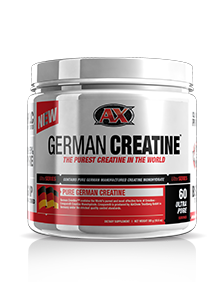 I want this now

After years of going back and forth about “the best kind of creatine”, nothing has stood the test of time and research better than creatine monohydrate. For such a well-recognized and inexpensive supplement, don’t settle for anything less than the most pure form available. German Creatine is made with 100% Creapure®, manufactured in Germany under strict GMP conditions, and verified for purity using High Pressure Liquid Chromatography. The end result is the highest purity level ever achieved in the world - a minimum 99.95%.

Only Creapure® has been investigated in more than 50 clinical trials supporting its short term safety. And numerous clinical trials have supported Creapure®'s long term safety as well. No toxic effects have ever been determined from Creapure® testing. The same cannot be said for other Creatines on the market that do not contain Creapure®.

If you only took one supplement ever for muscle growth, it might definitely be creatine. German Creatine is for athletes who take creatine and want to pay slightly more to ensure that their creatine is free from harmful contaminants.

ATP (adenosine triphosphate) is the cell's main source of energy. During exercise this is depleted and converted to ADP. Under normal conditions it can take several hours to reverse this process by the metabolism of sugars. Creatine speeds up this process by supplying the needed phosphate to convert ADP back to ATP instantly. The result is longer workouts with greater muscular energy stores.

* Percent Daily Values are based on a 2000 calorie diet.

Mix one(1) rounded teaspoon in eight (8) to ten (10) ounces of water or juice. Drink immediately. Fore best results, consume immediately after your workout.

Endurance athletes have known it all along. Boosting EPO - a natural hormone in the body - is the key to dominating endurance events. EPO stimulates the production of red blood cells (RBCs), which carry oxygen to working muscles. More RBC's equals more oxygen, which equals more aerobic power, greater muscular endurance and faster recovery.

Now you can do the same - without a grand jury inquisition! Mass FX contains chelated cobalt, a safe and natural EPO-stimulating element proven to significantly boost RBC production.

3-5 days. That's all it takes. Not 2-3 weeks like other testosterone boosters. In 3-5 days, Mass FX begins to work. Initially, you'll feel a rise in confidence. We call this the "alpha male" mentality. And it grows bigger each week. During your second week, you'll notice larger than normal improvements in strength compared to the week before. By day 12, your body will be producing almost 50% more testosterone. And, with improved aerobic power kicking in during week 3, Mass FX will help you exhaust your muscles even further, which forces them to get even bigger.

i would consider my self gym savoy as a past world champion (drug free) powerlifter approx 7ys ago. i still workout 4times a week. i have tried numerous supplements never have i had my body react so well to a creatine, finished the loading cycle and im 4 days into two servings a day one scoop upon waking and one after workout. I can tell a difference in my workouts, i feel my muscles are more energized, pumped up and im starting to throw up some of my old numbers cant wait to see where im at when my container is gone

I have taken this product and saw an increase in muscle size and strength, it also has allowed me to have more energy in the gym. I take 10g creatine on training days (5g preworkout/5g post) and 5g creatine on rest days. No bloated feeling and easy to mix with your preworkout or protein shake!